When travelling, we often find ourselves in the position of waiting in line. I’m sure that no one likes to be in a queue, but if we have to wait in order to get into the place we want to visit or in an airplane, we might as well make the experience as pleasant as possible for everyone, including ourselves. So here are a few rules and recommendations for queue etiquette: dos and don’ts of waiting in line.

To be clear, I know that the lines can be very long. I grew up in a communist country where we would wait in line in order to buy meat or fruits, and we actually didn’t know if they will bring meat or fruits to that store that morning. In fact, we would stay in line for everything, from milk to oil, sugar, or gas, everything that now we can virtually by in a few moments online or wait in a significantly smaller queue at the supermarket.

I also waited in line to big queues at famous museums or landmarks across the world. For instance, I think I waited for more than one hour at Musee d’Orsay in Paris. While it was crowded and again waiting in line isn’t necessarily fun, I had a pleasant experience there and ended up talking with some people from New York.

And because there are so many lines, there are several types of queue barriers that help businesses better manage the queues. You can wait in line to get on the airplane, to enter a museum, to enter a famous landmark (like the Eiffel Tower), or even at a supermarket (especially before a big holiday) or a pharmacy.

But you can have an enjoyable experience standing in a queue. So here are my best tips for waiting in line.

Click here to download a free Ebook: Travel Tips from a Seasoned Traveler on Safety, Money and More

Be mindful of everyone around you (don’t stress others)

This is perhaps the most important thing: to remember to be mindful of everyone around you. I’m pretty sure you don’t like to be disturbed by other people waiting in line next to you, so why should it be ok for you to bother others?

When thinking about taking an action while waiting in a queue, first think about this: with my action by other people around me? If the answer is positive, then you might want to consider not doing that thing that you were planning on doing.

For instance, if you were thinking of listening to music out loud played on your smartphone because that will relax you or it will entertain you while waiting, ask yourself if everyone around you would like to hear that music. And before you say “yes, of course! Who doesn’t want to be entertained and spend some time listening to music while waiting in line?”, think about this: could someone be ill? Could someone have a headache? Could other people want to talk? Could other people have different music preferences and be bothered by yours? If you answer “yes” at least one time to the above questions, then you should definitely not be listening to music out loud while waiting in line.

READ THIS:  4 Ways to Get the Most Out of Your Travels

And this is just a simple example, because there are numerous things that you could do while waiting in line that could actually interfere with the well-being of the other people in that particular queue.

You didn’t miss certain that not everyone will be interested in what you have to say especially if you will be speaking in a language that they may not understand or if it is something personal. Besides, it’s never fun and pleasant to hear someone speaking loudly. So why should you do it?

Please don’t talk too loud while waiting in line.

When I was waiting in line to enter Musee d’Orsay in Paris, there were some people behind me who asked me something. I replied and ended up helping them with something. Then they asked me where I am from, and when I said Romania, they complimented my English accent and general speaking skills. And we ended up talking about Romania, about famous landmarks and people here, and compared things regarding Bucharest to New York, the city where they were from. This made waiting in line so much more easy. And time actually seems to just fly by.

READ MORE: Musee d’Orsay, a Must Visit in Paris and one of my Favourite Museums

This was just a few years ago, but back when data on mobile phones wasn’t that affordable. People would actually look at each other and interact with each other. And that was a great opportunity for me to meet new people and to learn a little bit more about a different country and city.

If there are a few offices open, but only one waiting line, respect the order

Sometimes there are a few offices open but only one line. I saw that to some fast-food restaurants, in some supermarkets and even at some pharmacies. But I saw people who just wanted to skip the line and ignored the queue and just go to one of these open registers and be the first there.

That is really disrespectful of other people waiting in the same line. Try to avoid doing that. If there are a few offices open, but only one waiting line, respect the order.

Another thing you’d want to avoid while waiting in line is to start negative conversations. If you are thinking of just starting to talk about how waiting in line is awful, who’s to blame for this line, how awful the politicians are or any other topic that involves critiquing someone or a particular thing, then you should think twice.

Such a conversation triggers aggressive feelings and no one would actually enjoy that. Or maybe you would find one two people sharing your view but, in the end, you will all become more and more upset, you’ll be angrier, negative and you won’t be able to enjoy the experience.

Don’t spoil the experience for others

This is a huge thing to be paying attention to: if you’ve already visited a given museum or exhibit, if you’ve already been on that particular of ride in the past, or just expect too much from it, and you are just there because your child or significant other wanted to see or experience that attraction, then keep your impressions to yourself. Don’t spoil the experience for others by revealing all the good stuff or how disappointed you were on your last visit there.

For instance, if you are in an amusement park and you take a ghost ride in a roller coaster, don’t tell everyone all the creepy stuff that will try to scare them on that particular ride. It’s like if you’ve read a book and you give up the beginning the action and how it all ends. After all, I’m pretty sure you wouldn’t like it if anyone else will do the same thing for you and with ruin your experience by revealing everything there is to see or the negative parts that you’ll experience.

No one wants to wait in long lines. But if there is a line you should respect it. Don’t try to cut the line just because you are not in the mood to wait. It’s not polite.

I know that the internet packages offered by mobile services providers are more accessible nowadays, but try to avoid just staring at your phone the entire time.

Download the app while waiting using their Wi-Fi network

As you are getting closer to the entry in a particular museum where famous landmark, you might discover that the Wi-Fi is accessible. If that place offers a free app then you could download it while waiting, so that you will use it while visiting that place.

When asking for information or just trying to engage with other people waiting in line, always remember to be polite. It’s not just using the words locals use or respecting the local culture because you don’t know from which country the people next to you are from, it’s just that it is the way to go. Being polite will help you get help from people and interact with others. It will make you out I’m waiting in line more pleasant.

READ THIS:  Ways to relax while travelling

Don’t pick a fight with the guards

I saw many people wanting to skip the line or having things to say to the guards as if they are the ones that make the rules and they are out to get everyone else. Remember that the guards are there to enforce the rules that are usually published on printed papers that you can see on the walls or windows of that place. Often times, the rules are also available on the official website of that particular place. So try to obey the rules and not pick a fight with the guards.

Do a little bit of research before visiting a place and see if there are forbidden things you should know. For instance, you could discover that a particular place doesn’t allow you to bring food or drinks from a different place (common rule for cinemas, various attractions, airports, etc.).

Obey the rules in order to make your experience and the people next to you more pleasant. And to avoid awkward moments. If you brought a bottle of water and you know that it isn’t allowed in a particular place, then just drop it in the trash bin at the entry or ask the guard where you can throw it away.

Now looking at all of these rules it seems that there are more don’ts than do’s. But actually, it all comes down to respecting others and the rules of that place.

If you are polite, mindful of others, then you will have an enjoyable experience and in fact, all arguments, aggressivity, fights, and awkward moments while waiting in line will be avoided. Also, most of the rules that you will see in different places are actually common sense rules. As long as you try not to bother others and not to break the rules or try to be the smart one who cuts the line, then standing in queue won’t be an unpleasant experience.

Sure you could actually avoid some lines by waking up early and being among the first who go to visit a given tourist attraction, or if you go to a city offseason.

Have fun while waiting in line! 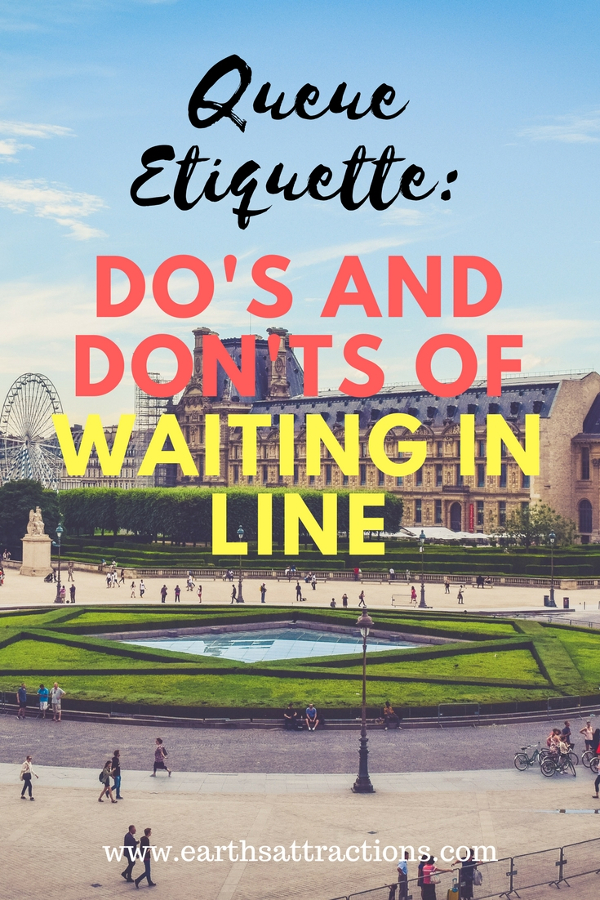