Trying the local food is part of an unforgettable trip. Discover the Australian food from this article. These are the top 12 popular Australian foods to try on your vacation.

As you’ll see, there are many Australian breakfast ideas, cool snacks, popular Australian desserts, and more!

These 12 Australian dishes to try are presented to you by Kelli from The Vanabond Tales.

Australian food: the 12 best Australian dishes you should try

Australia may be known for its incredible beaches, and the funny-looking and often deadly animals that live there.

The 12 popular Australian foods to try are:

Let’s discover what to eat in Australia!

Avocado or Avo on toast as it’s known in Australia can be found on every breakfast menu from Sydney to Perth.

Avocado smeared on toasted bread, it’s hardly a ‘recipe’, barely a ‘dish’ but perhaps don’t mention that to the Australians who are particularly passionate about their avocado toast.

Now found in cafes and brunch spots all over the world Australians will tell you it was them who ‘invented’ Avocado Toast.

In 2016 Avocado on Toast became a political flashpoint in Australia. A journalist blamed millennials’ inability to enter an inflated property market on their own constant splurging, symbolized, in his article, by frequent avocado toast breakfasts.

In Australia, Avocado-gate became a key point in the ongoing stoush between millennial and baby boomer generations.

History and politics aside the Aussies do a fantastic avocado on toast. Pick any inner-city cafe to try their spin on this breakfast classic.

As cafes vie for avocado dominance expect, reductions, glazes, crumbles, and anything else that might give their avocado the edge in a competitive market.

Just don’t be surprised if you have to take a second mortgage to enjoy this simple pleasure – and one of the best Australian foods to try.

A staple lunch or even breakfast food available at any bakery, meat pies and sausage rolls are found Australia wide.

READ THIS:  How to Create Shade at the Beach?

There are countless different variants and flavors of meat pies and sausage rolls.

Intended to be served piping hot and slathered in tomato sauce (ketchup), this popular takeout food is a tradition when going to the footy (football) or cricket. Definitely one of the best Australian foods!

ANZAC biscuits (cookies in some parts of the world) are some of the most iconic foods in Australia. Made from rolled oats, flour, sugar, butter, golden syrup, they are often enjoyed as a mid-morning snack with a cuppa (cup of tea) or morning coffee.

ANZAC is the acronym for the Australian and New Zealand Armed Corps who served in Gallipoli in the first world war.

The story goes that these popular biscuits were sent to the ANZACs because they traveled well and didn’t require ingredients that were hard to get during the war.

Today these simple biscuits are enjoyed throughout the year but have become synonymous with ANZAC day, a memorial holiday in Australia.

Another iconic Aussie biscuit is the tim-tam. Chocolate cream between two chocolate biscuits all coated in chocolate. The tim-tam is Australia’s favorite biscuit and it’s easy to see why.

This decadent treat is somewhere between a cookie and a chocolate bar and can be found around the country at any supermarket.

You may want to clear some space in your suitcase because once you try them you are likely going to want to take as many of the exclusively Australian biscuits home with you as you can.

The pavlova was created and named for Russian ballerina Anna Pavlova during a tour of New Zealand and Australia in the 1920s.

Of course, as with anything that involves both New Zealand and Australia, a bitter feud rages on over who actually invented the Pavlova. Don’t let this controversy distract you from trying this delicious creation.

A large meringue with a hard crust but a soft fluffy inside is topped with whipped cream and seasonal fruit.

READ THIS:  Off The Beaten Path Things To Do In Tokyo You Won't Want To Miss

Pavlova is the dessert of choice during the hot Australian summers especially on holidays like Australia Day and Christmas.

Sausages to the rest of the world, Australian’s approach to the humble snag is simple and delicious.

Snags are cooked on the barbie (grill) and then served up on white bread with grilled onion and tomato sauce (ketchup).

Importantly, the humble snag is the centerpiece to any classic Australian barbie.

A barbie refers to an outdoor gathering of friends and family where various meat and fish is cooked over a grill or barbecue.

So popular is the Australian barbie that free electric, gas and wood fired barbecues can be found in the majority of public parks around the country.

Another baked good synonymous with Australian morning teas, the morning snack between breakfast and lunch, you can find this cake at any bakery and is best enjoyed with a cup of tea as it’s one of the popular Australian dishes.

Many people associate fish and chips with the UK, but it has also become one of the most popular meals in Australia.

Fillets of fish are coated in a beer batter, crumbed like schnitzel, or simply grilled and before being served up with thick-cut french fries, known as chips in Australia.

This popular Australian takeaway food is best enjoyed by the sea from a fish and chip shop that serves up fresh locally sourced fish.

There aren’t many places in the world that serve kangaroo but here in Australia, it is possible to try this native meat. It is even found in some supermarkets.

An incredibly lean protein it is perhaps most similar to venison. The most popular way to enjoy kangaroo is on a hamburger, which, in Australia could feature, beetroot, an egg, and even pineapple.

Other unusual meats to try while in Australia include crocodile and emu.

Shrimp Prawns on the Barbie

Shrimp on the barbie was a phrase used as part of an Australia tourism campaign that aired in the USA in the 1980s.

The phrase has come to represent Australian cuisine culture and lexicon, in fact, Australia doesn’t use the word shrimp, and Australian’s have spent the last thirty-plus years distancing themselves from the phrase.

READ THIS:  The Safest cities in the world to visit right now

None the less, prawns as they are known here are extremely popular grilled on the barbecue or simply boiled and served up with lemon and seafood sauce.

Prawns are particularly popular at Christmas time where they take the place of turkey on the Christmas dinner table.

Italian food seems to make a home for itself wherever it goes. And like New York has adopted the pizza Australia has made the chicken parmigiana their own.

Known as chicken parmi or parma, depending on which part of Australia you are in the chicken parmigiana can be found in almost every single pub in Australia.

Chicken schnitzel is fried, adorned with various toppings, and then baked. The traditional toppings for the parmi are Italian tomato sauce, ham, and cheese, however, there are endless variations.

The parmi is almost always served with chips (fries) and a salad.

Ordering a chicken parmi at the pub is a right of passage for any Australian or visiting foreigner.

Last but not least, Vegemite is, if not the best, then, the strangest and most iconic Australian food. This savory black spread is a pantry staple in Australia and is most commonly served on toast for breakfast.

Like pb and j in the US or marmalade in the UK, Australians grow up eating vegemite. This might explain why Australians have such a high tolerance to this thick, salty condiment made from brewers yeast. To uninitiated foreigners, it is usually considered an acquired taste at best.

While vegemite might not be for everyone, you are unlikely to avoid being force-fed at least a little on any trip to Australia where the locals delight in watching visitors experience vegemite for the first time.

We hope you enjoy these delicious and unique Australian foods! 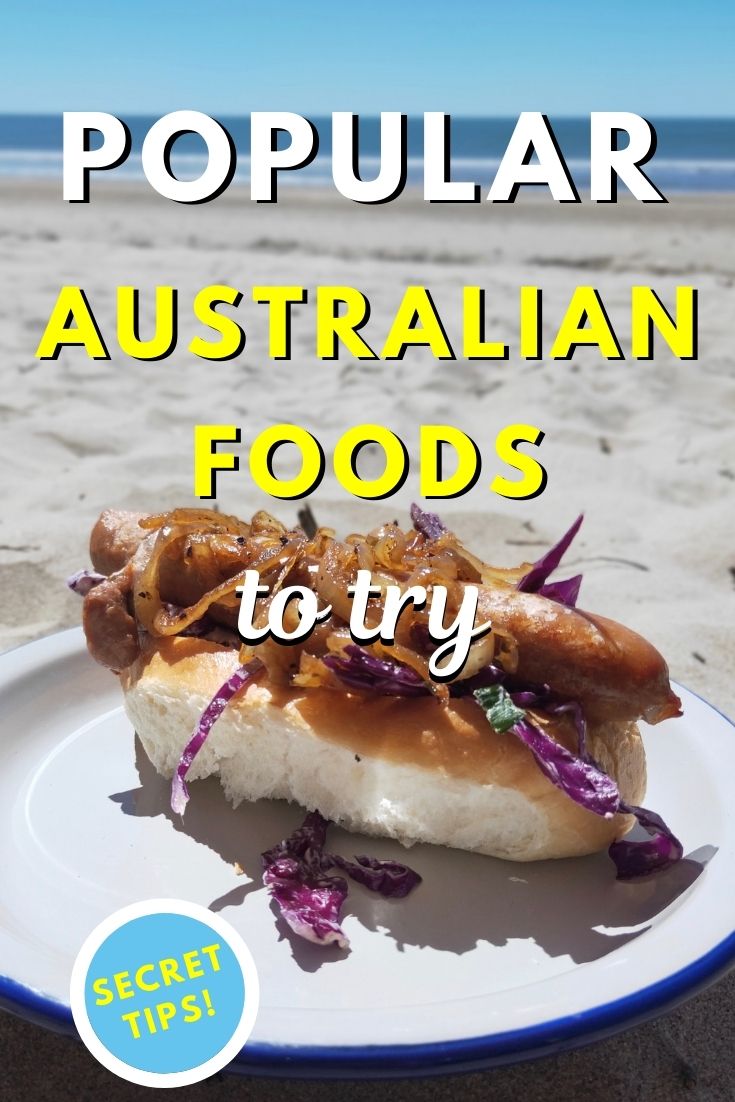 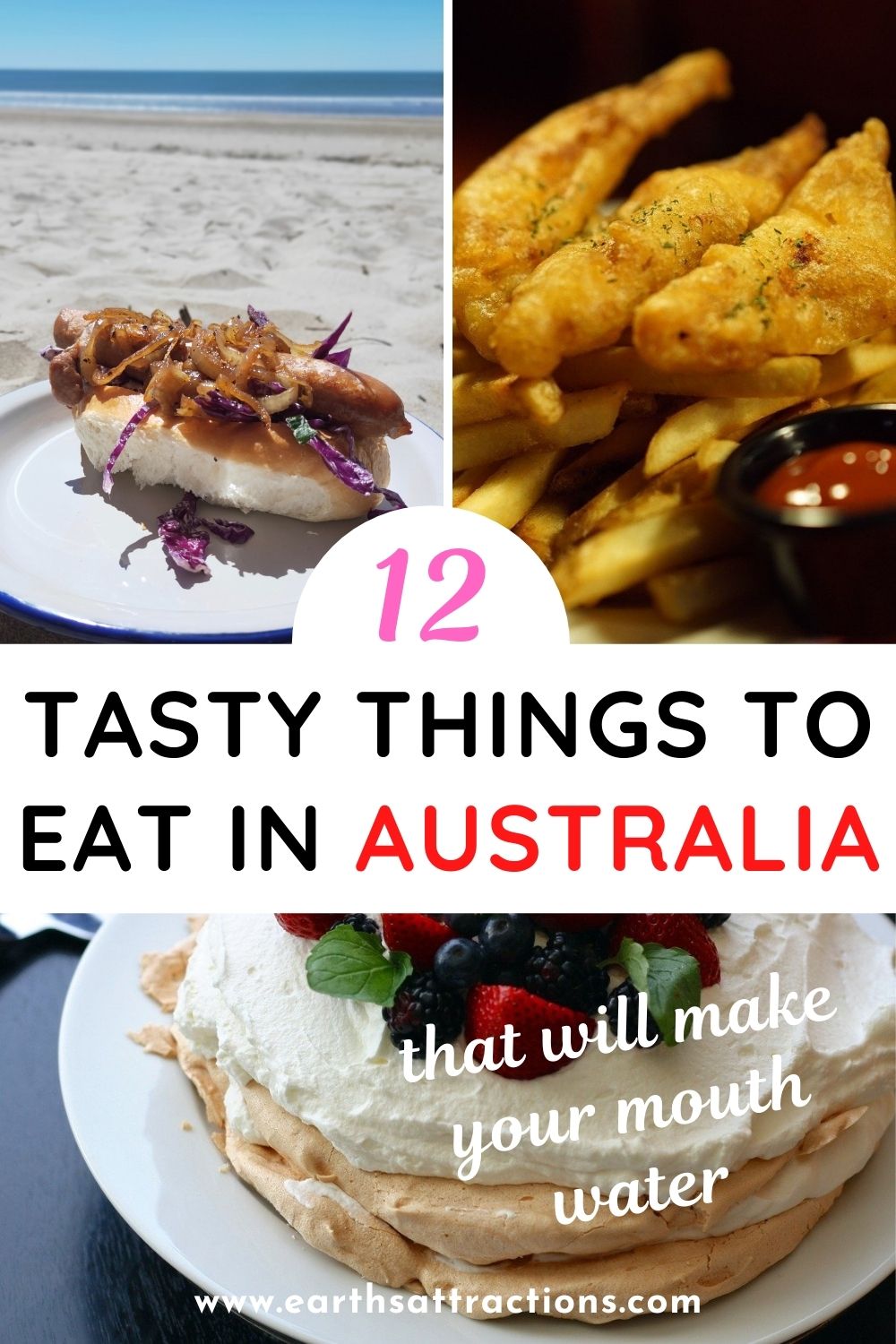 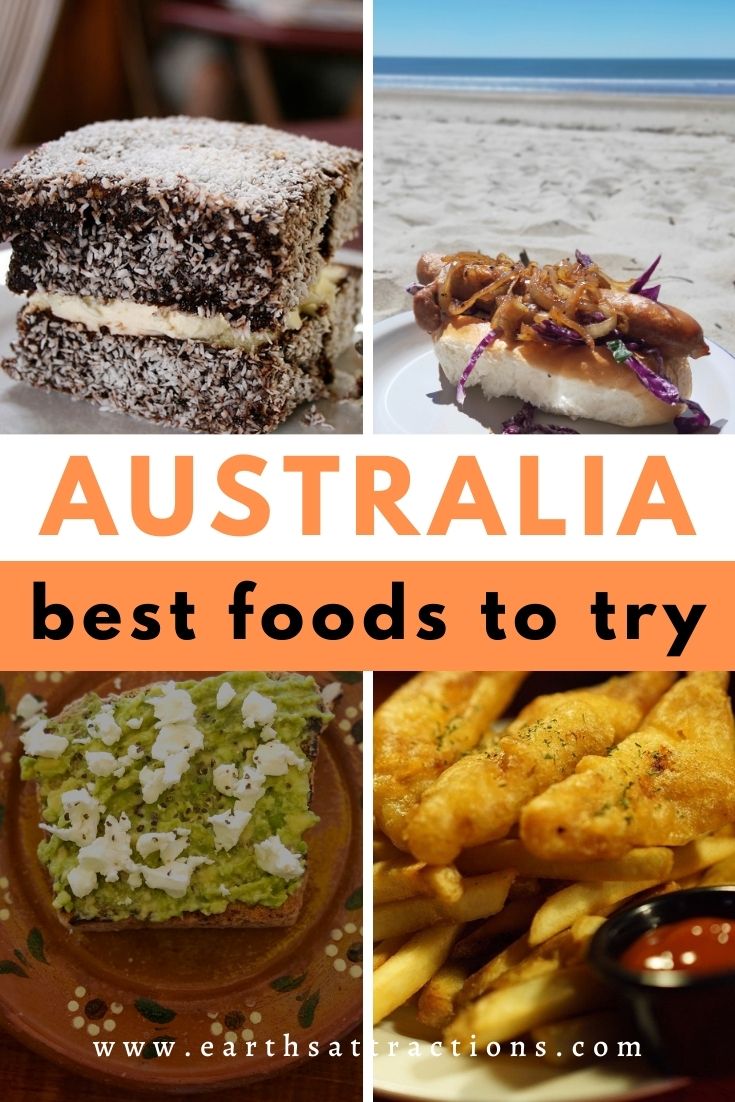 2 thoughts on “Australian food: the 12 best Australian dishes you should try”