There is plenty of fun to be had in the French Alps regardless of the season and time of year. But festivals add even more excitement and joy to the mountains. And there is music for your ears. Lot of it! I have put together a list of some of the best festivals that echo around the mountains throughout the winter season.

Get you dancing shoes or ski boots on find the party going on closest to you. Or check out flights and action holidays that will put you in the action in the mountains. Alpine Elements might just have some great deals that coincide with the best party. 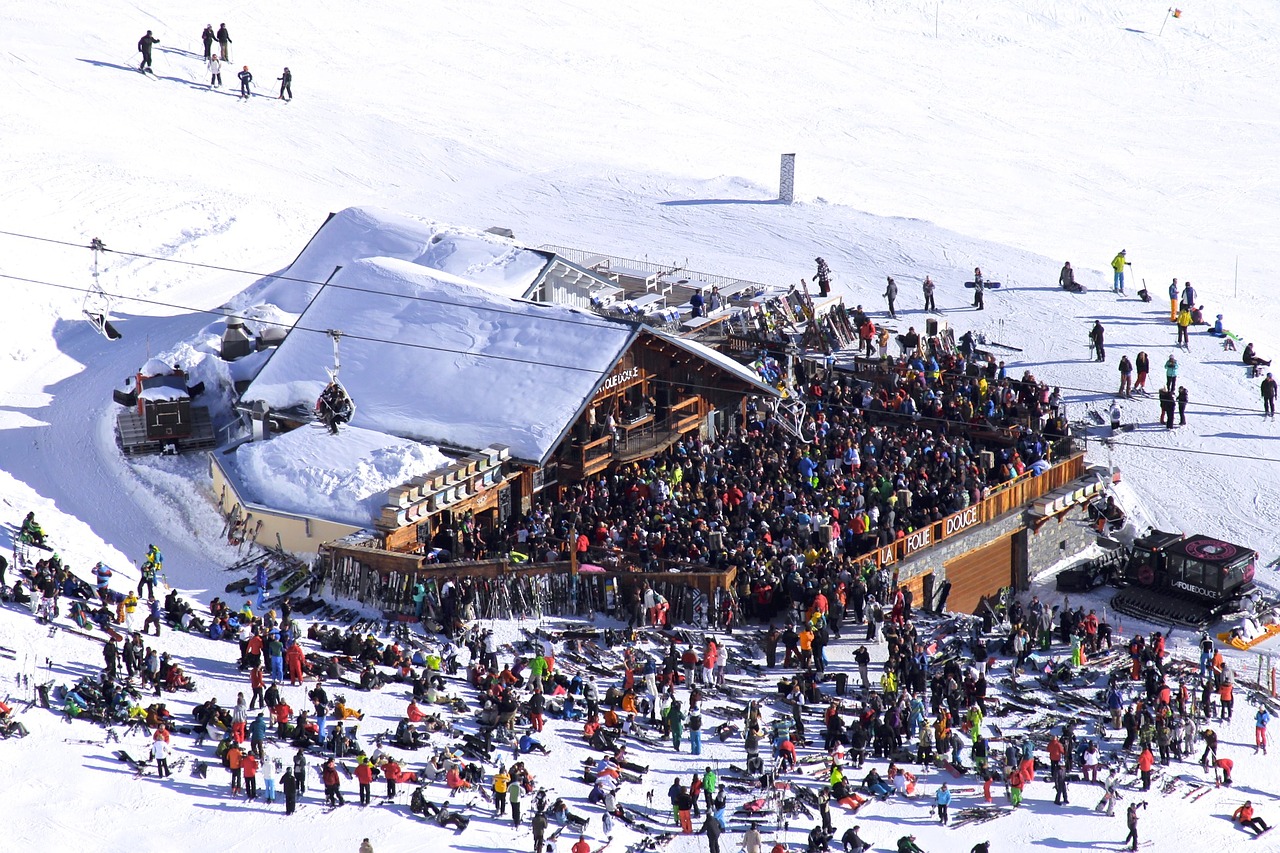 In January 2017 the “The Best Rider on the Best Mountains in the Ultimate Freeride Competition”  was held as part of the Swatch Freeride -World Tour where professional snowboarders and skiers met in Chamonix to compete for the title of the world’s best. The competitors had been competing prior at ski resorts in various countries like France, Switzerland, austral, USA and Russia before the penultimate in Chamonix.

They have just one chance at perfection down a selected off piste face to claim the title. In Chamonix this is usually from the top of the Index at Flegere, shooting for the best line down the Pente do Chamois. Back down in the village, celebrations go on prior, during and after the event with live music, promotional stands in the Freeeride Village. Even if yo don’t make it up the slopes you can watch the action on big screens in Place Balmat.

This festival has been held for over 15 years in Courchevel in February and March to the delight of many winter visitors. It takes place as a competition between teams of pyrotechnic artists to strive produce the most scintillating display to the delight of attendant audiences, all coordinated to the sound of rising crescendo of music.

READ THIS:  Gorgeous view of the Bran Castle

The festival begins with a moving torchlight descent by the local ski school and from there the lights and eyes are all skywards.

Evenings over consecutive weeks are then lit up by teams from different countries including Britian, Italy, France, and Austria with a final extravaganza by a non competing team from Belgium.

Skicolor Festival in Les Gets

If colour is more your style you should check out the Skicolor Festival in Les Gets on the 11th March 2017 which combines colourful partying with skiing down the well groomed slopes. The Les Gets event is based on an event in the USA. Participants wearing protective white suits ski down a spectacular run facing Mont Blanc. As they carve and pole plant their way they get covered in explosions of environmentally safe powdered colours.

But it’s not about coming first – it’s about taking part. The goal is to cross the finish line looking as colourful and happy as possible. There will of course be entertainment and live DJ to help with the party atmosphere. Be there or be square.

Snowboxx!!! And Rock the Pistes

One of the largest and most popular festivals is Snowboxx which migrted from Andorra to Avoriaz in the Haute-Savoie (High Savoy) region. Avoriaz holds pride of place as the highest resort in the centre of the Portes du Soliel Ski area in the Chablais region of High Savoy.

In 2017 it will be held on March 18 to 25th presenting the best of world electronic music.This vibrant week-long festival showcases acts on the main stage with popular headliners such as High

Some of the more whacky events on the slope include “Human Bowling” hurtling down slopes in zorbs to knock out large plastic tenpins. Test your lungs early in the morning with karaoke gondolas on the way up the slopes. Stash Park Paintball will test your 007 skills as you stalk on skis or snowboards. And if none of those entice you to action try out Extreme Snowball fighting, the Winter Olympic sport of the future. There is even a snow ball making machine to make sure you remain armed for the assault.

READ THIS:  A guide to Poznan, Poland

Plenty of chillout igloo bars and ice sculptures dot the slopes with international DJs to entertain you all day and night. As if that is not already challenge and entertainment for one week there is also two days of a Ski Slope Treasure Hunt keeping you super sleuthing for 17 markers that are to be hidden in stashes all over the Port du Soleil ski area.

An integral part of Snowboxx is Rock the Pistes taking place all over various sites of Portes du Soleil. As the promotional material says, “Two countries, 25,000 people and over 80 concerts a day” which is a whole lotta music for a pair of ears. There are five events that take place in a different mountain resort from 1.30 each day, followed by over 50 concerts at the foot of the slopes at the end of each day. That is massive!

It’s all part of your ski pass so once you hit the slopes the gigs are free and you are sure to be entertained somewhere on the slopes. Your Rock the Pistes is truly and international festival, as it takes place on both sides of the French and Swiss border. AT Rock the Pistes, après ski fun time starts early.

If Snowboxx leaves you crying out for more you can travel a few mountains over to Tignes for the Francofolies live entertainment mix. The Francofolies Music Festival which originates in the south western quarter of France, moving to Tignes for a three day music festival from the 9th to the 16th of April. There will be four days of free concerts and events to party hard with almost all day après ski.

The line up is mainly French music stars who know how to get the party going even if it the end of the snow season for 2017. The actual artist line up has yet confirmed but with plenty of action over three stages, two on the pistes and one in the village, there will be something for everyone. Not to mention the shows are included in your lift passes for Tignes.

READ THIS:  Is Ibiza All About Partying And Nightlife? Here’s A List to Prove You Wrong

Planned for the 16th to the 23rd of December 2017 the Rise festival will be just the place to get in the mood for Christmas festivities. This is a mountain music festival hosted by the organizers of Ibiza Rocks so they should know how to put on a good party for all dance music fans.

Rise Festival has been running for a few years and was the product of the Rise team’s idea to throw great parties at the top the world, in this case the in the French Alps at Les 2 Alpes area.
The skiing is for fun with a little competitive edge with events such as dual slalom for skiers and boarders. Then you can test your freestyle skills with lots of prizes to be won for all levels. Fancy dress is optional but recommended. The festival ticket includes 6 days of lift passes so hit the slopes every day and the dance floor every night.

But Rise is not all about action. There are early rise yoga classes, free face art, glitter and jewels and spa areas for massage, shiatsu and floatation tanks.

There is always a party going on somewhere in the French Alps. If you can add some extra fun to your holiday plans why not choose one of the great festivals that ski areas put on to celebrate the mountains. Or if other parts of the world beckon check out some other festivals on Earth’s Attractions. There is always more fun to be had somewhere.