Malaga is one of the best cities to visit in Spain. Great museums, lovely shopping streets, ancients monuments, and great landscapes – they are all waiting for you in Malaga and will enchant you from the first moment you set foot here. Read this insider’s guide to Malaga, Spain to discover the best things to do in Malaga, off the beaten path things to do in Malaga, where to eat in Malaga, where to stay in Malaga, and valuable tips for Malaga from Silke, a book author, travel writer and blogger at Happiness and Things who lived for a while in Malaga. This guide is part of the free travel guides series on this blog.

An insider’s guide to Malaga, Spain: discover the best things to do in Malaga 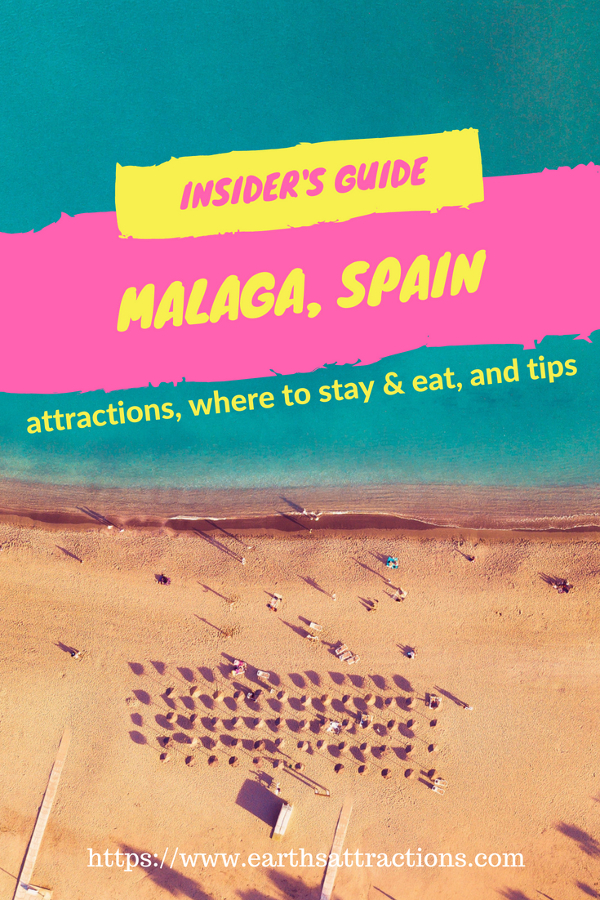 Malaga is a sun-blessed city in the South of Spain. Even though it’s the heart and centre of the Costa del Sol, for many years it has been in the shadow of other great cities in Andalusia.

But there is no need to hide for Malaga – over 30 museums, a re-vamped leisure port, gorgeous shopping streets and some of Spain’s most fascinating ancient monuments offer plenty of things to do in the city.

Today, Malaga is no longer just a gateway to the Costa del Sol, it is a destination in its own right. Whether you are planning a short weekend city trip, a day trip from the Costa del Sol, or plan your shore excursion when stopping on a cruise, in this guide you will find some of the best things to do while in town.

Alcazaba
The Moorish palace sits on top of a hill overlooking the city centre. It is less crowded than those palaces you would find in cities like Granada or Cordoba but still offers some great insights into Arab-style castle building. Highlights include the water gardens, the well preserved details inside the palace buildings, and the views of the city.

Muelle Uno
The leisure port of Malaga has seen some great restoration works done in recent years which have helped reclaim the land for the public. Muelle Uno comprises of shops and family-friendly restaurants, the Centre Pompidou Malaga (a sister museum to the one in Paris but without the crowds), various bars with waterviews, an observation wheel and lots more.

Cathedral
The Cathedral of Malaga is lovingly called the “one-armed lady” because it was never finished. One of the two front towers is incomplete, adding some charm and character to the imposing building. The cathedral was built in Baroque style, and even if you are not ready to pay the fee to see the inside of the church, feel free to walk around it, explore the treasures in the garden and marvel at the ancient painted outside walls.

Gibralfaro
The Moorish fort is located on the hill right behind the Alcazaba. The two complexes used to be connected, but they are not so anymore. You can and should visit both, since each one of them is a great attraction in its own right. The best thing about the Gibralfaro are the strong ramparts and watch towers from which you can see all the way to the Malaga Mountains, but there is also a tiny museum inside which has some maps showing Malaga during the times of the Moors.

READ THIS:  The Best Ski & Winter Festivals in the French Alps

Roman Theatre
The Roman Theatre is hard to miss. It’s right in the city centre underneath the hill with the Alcazaba. You don’t have to pay a cent to see it or the adjoining interpretation centre. Under a glass pyramid in the centre of the pedestrian way, there are more Roman remains to discover, including parts of a garum factory (garum used to be the ketchup of Roman times, made from fermented fish).

Jewish Quarter
Malaga’s city centre with its Baroque buildings and polished marble streets is pretty throughout, but we particularly like the charm of the narrow streets of the Jewish quarter. You will find many bars in this part of the city, some street art around the famous El Pimpi bar, as well as the Arab baths. If you are interested in Jewish history in Malaga, there is a museum for that, too.

Picasso Museum
Pablo Picasso is probably the best known Malagueño (after Antonio Banderas). Visitors to the city can not only visit the local Picasso Museum which is located in an ancient palace resting on even older foundations. There is also Picasso’s birthplace where he spent the first couple of years of his childhood. Make sure you also take a cheesy photo with the master on the bench on the Plaza de la Merced.

Malaga Off the Beaten Path

Here are the best off the beaten path things to see in Malaga.

Street art in Soho
A couple of years ago, an initiative was started in Malaga to refresh a neglected quarter near the port and add some incentive to lure people back into the streets. A number of worldwide renown street arts answered the call to transform the quarter into a public canvas, including Roa, D’Face, Faith47 and Felipe Pantone. The result is a revival of the quarter and a must-see for anyone interested in urban art.

Atarazanas Market
The central market of Malaga may not be as well known as the one in Barcelona but it’s certainly one of the best in Spain. The market halls occupy the site of the former shipyards, and you can still see one remaining Moorish arch from the previous building that was located here. The markets are open daily except Sundays and offer a mix of local produce and freshly cooked tapas. A feast for the senses.

Automobile and Fashion Museum
Given the size of the city, Malaga has a surprising number of well recognised museums to show for. One of the lesser known but a very interesting museum is the Automobile and Fashion Museum. It is located a little bit outside of the city centre but the trip is absolutely worth it, in particular if you are interested in design. The museum pairs beautiful old-timers with high-end fashion – quite an unique concept and well-worth seeing.

READ THIS:  Spectacular view from the airplane

El Palo
The closest beach to the city centre is Playa la Malagueta, but if you would like to play where the locals go, try El Palo instead. This former fishing village is home to the former villas of sea captains and their families. Along the beach, try a local delicacy: a char-grilled sardine skewer – they are widely available and taste heavenly.

Camino del Rey
Technically not in Malaga, but easy to reach even without a car, the Camino del Rey must be one of the best nature experiences one can have in Spain. The hiking path follows the El Chorro gorge and is in parts suspended some 100 metres above the ground. The Caminito del Rey used to be the most dangerous hike on earth (some hikers fell to their death in recent decades) but a recent restoration has transformed the former workers’ trail into a safe, fun and unforgettable experience for anyone with a moderate level of fitness.

Where to eat in Malaga

Malaga is one of the biggest cities in Andalusia, and people tend to eat light, small dishes throughout the day. The first “real”dish is very often not eaten before 10pm at night when temperatures become more bearable in summer. These light dishes, tapas, are cheap and quickly prepared and are best enjoyed as a shared table experience with friends.

Malaga has countless tapas bars to choose from, here is a selection:

READ MORE: Best free things to do in Valencia

Where to stay in Malaga

Since most guests visit the area to stay at one of the beach hotels on the Costa del Sol, Malaga still has some catching up to do in regards to accommodation options. However, there as still a handful of noteworthy hotels that you can check out if you prefer staying in the city rather than on the coast.

Hotel Molina Lario: Lovely hotel near the Cathedral with small rooftop pool, in walking distance to all major sights. Excellent breakfast buffet including churros and cava.

Gran Hotel Miramar Malaga: An amazing and beautiful luxury hotel which offers everything you could wish for: sea views, a spa, a rooftop bar, and a pool. It is located right on the beach, just a few steps from the Plaza de Toro, Muelle Uno and the Alcazaba.

Malaga is well connected to the seaside resorts along the Costa del Sol, in particular to the ones on the Western part of the coast as there is a local train service which operates all the way to Fuengirola. If you want to combine a trip to Malaga with a stay on the coast, we recommend you look into accommodation options somewhere along the train line.

Malaga is generally a very safe place to visit, however, as always you need to be careful in crowds, around major attractions, and on the beach. Don’t speak with gypsies trying to sell you table cloth, flowers or herbs. Think twice if you want to buy cheap sunglasses from one of the flying vendors on the beach. Overall however, Malaga feels much safer than other Andalusian cities that receive more visitors from overseas.

Malaga is still a hidden gem in Andalusia, but has a lot to offer. When temperatures soar in inland cities like Seville or Cordoba, Malaga still enjoys a temperate climate with fresh sea breezes. If you haven’t considered it for your next weekend break yet, think again. There are many cheap and quick flight connections from all major airports in Europe, making it such an easy weekend trip destination.

About the author
Silke is a book author, travel writer and blogger at Happiness and Things. She spent one year living on the Costa del Sol and has visited pretty much every place worth visiting in Andalusia, and that is a lot. Malaga proved to be the perfect base for her explorations. You can find more Andalusia tips on her blog. You can also follow her travels on Facebook and Twitter. 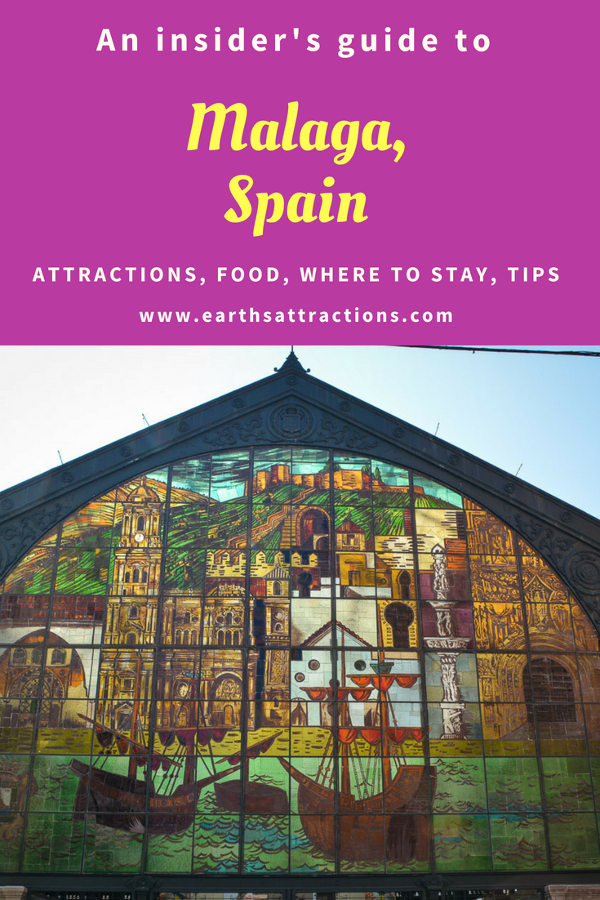 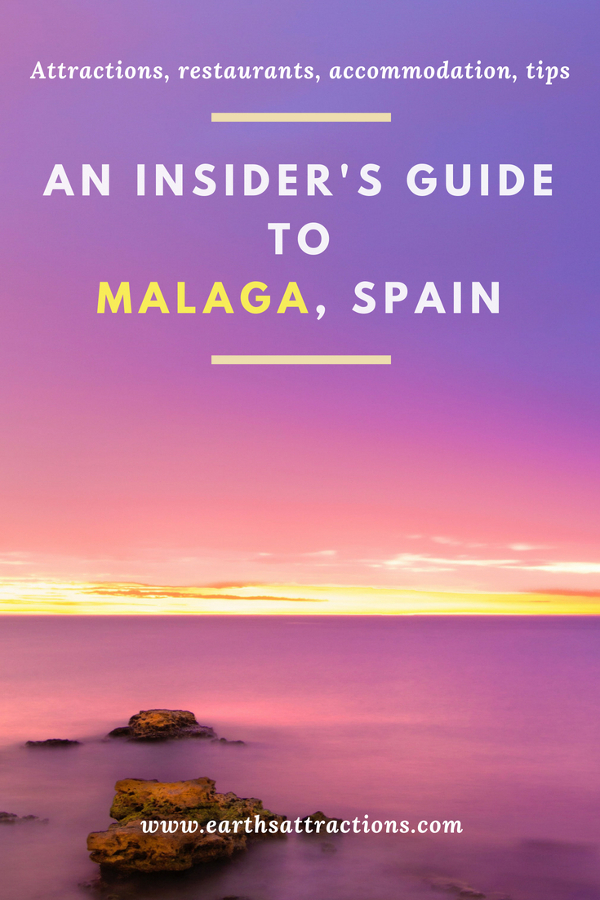