Apart from the famous cities to visit in Italy, there are some secret towns in Italy that will mesmerize you and allow you to discover the country’s beauty, history, and culture without the crowds.

These hidden gems in Italy should be on your next Italy itinerary and this article will show you why.

Yes, we could say that there is a Secret Italy, one filled with gorgeous places to visit! Discover 10 lesser known destinations in Italy shared by Ingrid from IngridZenMoments.

Each of these unknown places to visit in Italy has its special charm, as you’ll easily discover, so make sure you check them all and decide what you’ll include on your Italy bucket list.

The Fall of the Roman Empire in 476 A.D. captured the imagination of many artists and writers over the ages. The barbarian Odoacer deposed the last Roman emperor, Romulus Augustulus, and took the imperial throne in Rome – the scene was immortalized numerous times in paintings.

But unfortunately, the story of the Fall is misleading in more ways than one. For example, the imperial capital was not in Rome anymore but in the city of Ravenna. Also, the event didn’t lead to the end of the Roman Empire nor the Roman culture, law, and administration in Italy.

On the contrary, under Odoacer’s successor, Theodoric the Great, Ravenna and the whole of Italy went through a sort of golden age, reaching levels of prosperity and peace not seen since the glory days of the empire.

Today’s visitors of Ravenna can marvel at not less than eight UNESCO World Heritage sites, six of them erected after the so-called Fall of the Roman Empire.

These early Christian monuments are a testament to the enduring Roman engineering ingenuity and artistic creativity, contradicting the post-apocalyptic picture implied by later writers.

Moreover, Ravenna hosts several churches and palaces built or rebuilt during the Middle Ages, taking the visitors on a journey through time.

Lastly, once the visitors sated their thirst for history and architecture, they can spend some leisure time on the Adriatic coast in one of the nearby seaside towns such as Rimini.

For countless centuries the maritime trade in the Mediterranean was monopolized by a handful of rich city-states from Italy and the Dalmatian coast (today’s Croatia). Venice, Genoa, Pisa, and Amalfi are most celebrated among these so-called maritime republics. But there were other powerful cities whose memory faded in time. One of them is the Republic of Noli.

On the coast of the Ligurian Sea, Noli’s good harbor and shipyards allowed the city to become a commercial powerhouse despite its proximity to its larger competitor, Genoa. In fact, Noli formed a lasting alliance with Genoa that lasted from 1202 until the end of Noli’s Republic in 1797.

READ THIS:  Gorgeous view of the Bran Castle

The city’s main architectural monuments were erected during Noli’s glory days as a maritime power. However, the church of San Paragorio was first built in Late Antiquity, probably in the 5th or 6th century; it is considered the most beautiful Romanesque-style building in whole Liguria.

Strolling through Noli’s colorful streets and stopping for an espresso at one of the small coffee shops is a quintessentially Italian experience you shouldn’t miss if you happen to be in Liguria.

Even in a country known for its rich historical heritage, the southern part stands out, with many cities tracing back their origins to the dawn of human civilization. Brindisi is one such town and one of the best hidden gems in Italy.

Inhabited by Messapians and later by Greek colonists hailing from Crete, Brindisi became a Latin Colony after the Roman conquest of 267 B.C. Brindisi became a large city and the main Italian port for those heading to Greece and the East.

Like most of southern Italy, Brindisi saw many rulers and conquerors come and go, from Goths to Arab Saracens to Normans and Spaniards. Its convoluted history left its mark on Brindisi’s architecture.

The Grand Castle or Castello Grande was built by the ruler of the German Holy Roman Empire, Frederick II; the Spanish Aragonese rulers further developed it, adding several towers.

The Aragonese Castle or Forte a Mare (Sea Fort) was erected by King Ferdinand I of Naples on the San Andrea island overlooking Brindisi’s port.

Countless churches from diverse periods can be found in the city, offering a rather wide assortment of architectural styles for modern visitors.

Outdoors enthusiasts can enjoy one of the four nature reserves located in or nearby Brindisi, including the Marine Nature Reserve Guaceto Tower administered jointly by Brindisi, Carovigno, and the World Wide Fund for Nature (WWF).

The island of Sardinia is mostly associated with beautiful sandy beaches and clear azure waters. What if I told you that Sardinia also boasts a good ski and winter sports resort?

Bruncu Spina is the island’s second-highest mountain located in the Gennargentu Mountain Range in center Sardinia.

At 1800 meters high, the average number of snowing days is lower than in the Alps; still, there are a couple of months of skiing season per year – which make this one of the best unknown places to visit in Italy.

READ THIS:  Top attractions in Iceland you can't miss

If you have a hard time choosing between witnessing natural beauty, marveling at humanity’s monumental accomplishments, or lounging on a sandy beach while enjoying a good book, then Vendicari is for you.

The Vendicari Nature Reserve in Sicily, nearby Syracuse, is a 1500-hectares protected area. The wetland there is an important waypoint in numerous birds’ migratory routes.

The Reserve hosts the ruins of an old necropolis and the remains of a historic tuna fishery.

Last but not least, there are five attractive beaches in Vendicari, ideal for sunbathing, swimming, or just lazily lounging about.

Often overlooked because of its proximity to Milan, Bergamo is a beautiful city nestled in the Lombardian Alps and one of the less known destinations in Italy.

Founded by the Celtic tribe of Cenomani, the city became a Roman subject when the nascent Mediterranean power conquered Cisalpine Gaul, the northern Italian region inhabited by Celts (Gauls).

Bergamo became an important military hub until its destruction by Attila’s Huns.

The city retained a prominent position during the Lombard period and the subsequent Carolingian and Holy Roman Empires. Later, it was part of the Duchy of Milan before it was ceded to the Republic of Venice.

After a period of French domination in Napoleonic times, Bergamo fell under Austrian domination. Finally, Garibaldi’s independence fighters conquered the city in 1859, incorporating it in the newly-founded Italian Kingdom.

Interestingly, Bergamo has two city centers: the Upper City encircled by medieval walls built by the Venetians and the Lower City containing the modern part of town. The two parts are connect by a funicular (a cable car).

The Upper City is most popular with tourists due to its narrow streets and countless monuments. In addition, you can visit the citadel, several palaces and churches, a couple of museums, and a botanical garden.

Bergamo is easily accessible due to its International Airport and good rail connections to the main cities of Lombardy, such as Milan. Moreover, Bergamo is connected by high-speed train to Rome.

If you love thermal baths & spas, the Therme di Saturnia is a must-do destination.

The springs are located in Tuscany, near the town of Saturnia, an ancient Etruscan town. The spings cover a vast territory, forming hot waterfalls and natural pools. The mountain background adds to the place’s unique beauty.

Baia, located in the Gulf of Naples, was the luxury retreat and resort of the rich & powerful during Roman times. It was considered superior to Capri, Pompeii and Herculaneum, and, thus, wealthy Romans built their holiday villas at Baia from 100 BC to 500 AD.

READ THIS:  A day in Brno, Czech Republic; travel guide

Unfortunately, the lower part of town was flooded by the sea due to volcanic activity. Still, many of its monuments were preserved and are now part of the Submerged Archeological Park.

Many impressive Roman-era buildings survived in the upper part of town, among them the temples of Diana, Mercury, and Venus.

If you are curious to see how the rich lived 2000 years ago, a trip to Baia might be what you are looking for.

Have you ever wondered how a landlocked city like Rome became the world power of its day? After all, feeding a million people and catering to the exotic shopping needs of the countless millionaires was not an easy task in those times; there were no cars, trains, or planes, remember? This is where Ostia came in.

Ostia used to be the port town of ancient Rome.The grains from Egypt and Sicily and the exotic goods from all over the empire arrived in Ostia by sea, and they were either loaded into carts or shipped up the Tiber.

Fast forward 2000 years, the former port became a popular holiday destination for Romans; many choose to spend their summer holidays there, on the seaside.

The large archeological park of Ostia Antica is sought out by numerous history enthusiasts due to its well-preserved buildings. You can marvel at ancient apartment buildings, the so-called “insulae,” or even visit Roman latrinae, the public toilets.

Also, one could see the remains of different warehouses, the pre-Amazon distribution centers for all the things the ancient Romans desired.

Rechensee or Lago di Resia is an artificial lake in Northern Italy, a few kilometers away from the Swiss and Austrian borders.

Set in the picturesque Alps, Rechensee was created in the mid-20th century by flooding several villages including Graun and Reschen. Apart from the clear blue waters, the defining feature is the 14th century church tower jutting out of the lake.

During winter, when the lake frozes, one can walk over to the tower on the frigid surface.

Ingrid is a travel blogger and book lover on the constant search of places and experiences that bring joy to life. She is originally from Romania, has studied in and has traveled extensively throughout Italy, and has lived the expat life in Hong Kong and Seoul. You can follow her stories on IngridZenMoments 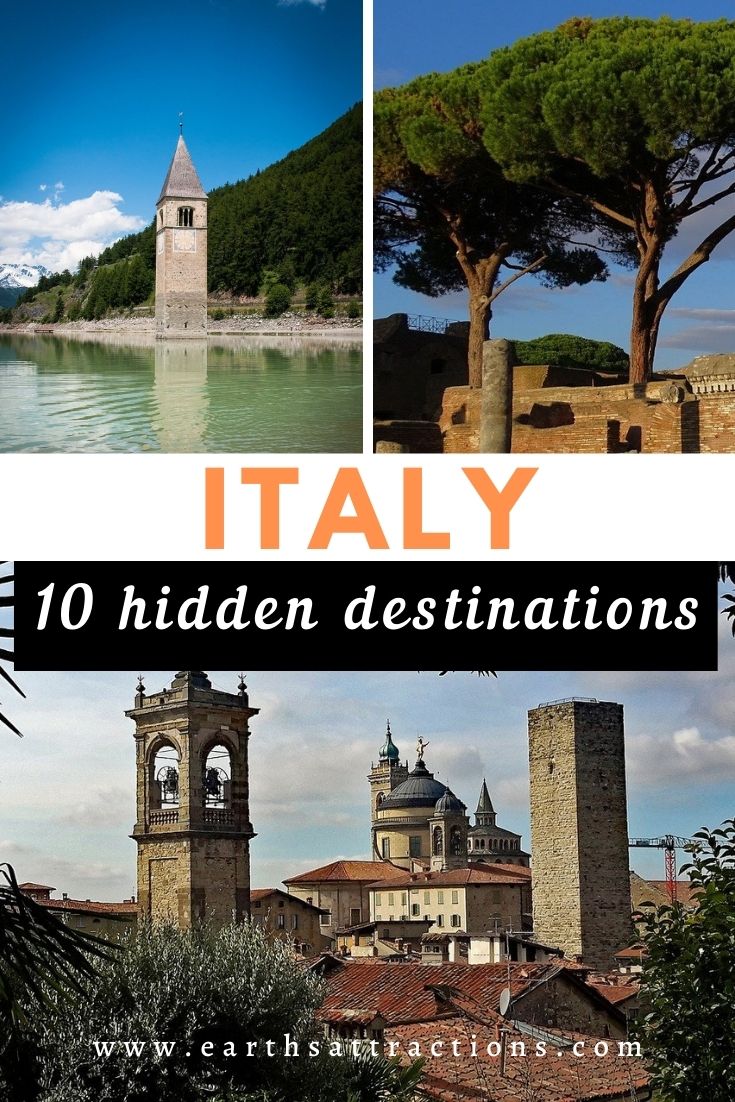